Celebrating Christmas in a country that doesn't celebrate Christmas 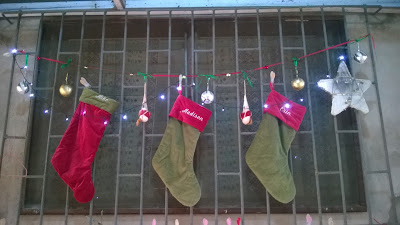 Our first Christmas in our new little country.  It is an interesting time indeed.  It will be the first Christmas of Madison's life we won't be sharing it with her.  She came for the summer, and therefore we don't have the funds to get her here twice in one year.  So - she will be spending the time with her grandparents and her Aunt and Uncle in California. They have great plans for her, and I know she will be well cared for.

But here I sit, in a country that doesn't celebrate Christmas, and it's my favorite time of the year.  I'm not sure what to do with that yet.  Because we sold everything before we came, all of my Christmas decorations were sold right along with everything else.  I didn't realize that that was going to be a problem, thinking I would just pick up new stuff when I arrived in country.  However, we found out that the country doesn't celebrate it.  What do I mean by that?  Well - it's two-fold.  The first, the primary African culture here doesn't celebrate it, so there's that.  And secondly, the church does not celebrate it.  I've talked with a lot of pastors  since I've been here in respect to that, and have received varying reasons behind that.  The primary reason is that they believe celebrating a day that is not really Christ's birthday, along with all the peripheral decorations, etc. is offensive.  There are a few exceptions - and the little Baptist church we attend is one of them.  But, for 95% of the churches here, December 25th is just another day.

I love Christmas.  I love everything about it.  I love people getting together, I love Christmas parties, I love candle light worship services, I love hearing Christmas music in the mall, drinking hot cocoa in the cold, sitting in front of a fire place, decorating my house, seeing lights around the neighborhood, hearing Christmas music on the radio, every store decked out in lights, cutting down a Christmas tree, and just living in the season as we read our daily Advent and prepare our hearts for the coming of our Lord and Savior Jesus Christ.  For me, all the things around Christmas all help lead my heart to that incredible celebration of the birth of the most important person to ever have lived.  That may sound superficial and materialistic to many.  I don't apologize for it - every time I see a Christmas display, I think of Jesus.  Every time I hear a Christmas song while out and about, I think of Jesus.  Every time I see lights and decorations, I think of Jesus.  For me, it's a time to say a prayer, and give glory to Him who is the Highest.

Even in Honduras, where Christmas is a huge event, although I was typically sweating on the day, there still were people all over who decorated for Christmas, Christmas programs at the schools, the mall was decked out to the max, they had bands playing music at the mall, and lights and displays around town.  Here?  Almost nothing.  So, in my attempts to make it feel a little like Christmas, I did the best I could with what I had.  Anyone who has come over to my house during Christmas would look around my house now and know how bare it looks.

I am making my cookies, and going to a gathering this weekend, and am trying to enjoy this season through the sweat of 95 degree days.  With no Christmas tree, no presents to unwrap, and no kid here to celebrate with, Christmas day is going to be a quiet event at the Pettengill house - just the two of us, with a city closed down, the streets empty, and no one around us celebrating.  A strange thing indeed.
Posted by Unknown at 5:21 AM 2 comments:

Think back to the 1980's, when HIV, unfortunately, became the new deadly disease.  Rumors flew about how it was transmitted, who was at risk, and was essentially a death sentence.  We've since come a long way.  Now, at least in the majority of first world countries, HIV has been placed into the category of "chronic" diseases - and is no longer (for the most part) a death sentence.  Here, in Africa however, it continues to run it's deadly rampage and remains as the #1 cause of death in a large majority of African countries.

As I am concluding teaching my first seminary level class on the subject it has become more and more apparent as to why this is the case.  I will only speak of the country I am living in, because that is as far as my personal knowledge goes.  I have read more books over the last few months about the subject, so have become a lot more educated about HIV/AIDS in Africa, but my personal experience with it only covers this little country.

My first day of class I wanted to explore what the myths surrounding HIV were in this country.  So I made up "sticky" notes that had a combination of true and false statements, and asked the students to place them up on the board under each category so I could get a feel for what my students thought.  This is the list I came up with, and their responses next to each statement (I have put the actual answer next to it)

This was a great way to start the class, because I could immediately counter the myths, teach them the realities of the disease, and educate them on prevention and methods of transmission.  I can't say this went over easy - it was a much heated conversation, and took a lot of convincing, showing of evidence, and showing statistics before people started to come around and believe it.

I was, however, still worried about the overwhelming statistics of HIV/AIDS related deaths in a country where testing and medication is free.  And I found out the reasons why.  1 - sex education is considered a taboo in this country.  It simply isn't discussed in the home, in church, or anywhere for that matter.  2 - the huge stigma that continues to be attached to this disease, people are ashamed, and don't want to be seen going to the hospital to get their medication. 3 - polygamy is an accepted cultural norm.

The thing I continued to discuss when my students were getting frustrated was that this was not something that could be changed in a day, in a few months, or even a few years.  These were cultural norms that were going to take a generation to change, but that did not alleviate the necessity that we start NOW, and start with THEM in THEIR churches.  That it was our job to break the cycle and to be part of the solution.  So, I challenged each of my students to talk to their children, to start programs in their churches, and to be active and vocal in their communities.

We, as North Americans, as people of a completely different culture, and shake our heads in wonder as to why people believe what they believe.  But I ask you to step back, and consider your surroundings, your resources, and remember where we came from in the early stages of this disease.  It took a lot of public health education to help everyone have a better understanding of this disease, and here, in Africa, we still have a long way to go.

One of the final activities I had my students do was to give a bible study on key verses that I provided them with.  They were required to tie in the biblical truths with HIV/AIDS outreach, and as a church body.  The results were incredible!  As the last student gave their bible study, I stood up in front of the class and said, "Remember how, on day one of this class you couldn't 'see' how HIV/AIDS was in the bible?!  Do you see now?!"  To which I received a resounding YES, accompanied with applause, hooting and hollering, and grins all around the class.
I have challenged the class to now take action.  To not just take this information in, but to apply it to their everyday lives - start ministries in their churches, do outreach into their communities, and to serve those who are infected, and strive for prevention through education.  Only time will tell - but to me this is the best solution of all - Nationals serving Nationals.  When one of the students told me that I needed to go to every church in the country and give out this information - I told them that I will go as often as I am asked, but the "answer" was that THEY were the ones to now go forward and to make things happen.  THEY are the answer for THEIR country -I'm just a small part to play for how ever long I am here, but the country will only be changed if each take on accountability and responsibility to make that change.