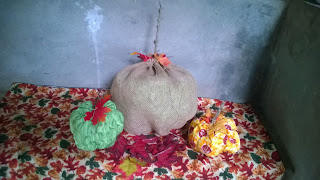 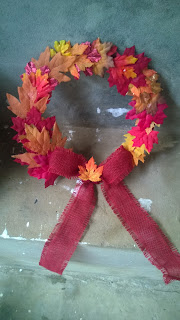 Fall.  One of my most favorite seasons.  I have so many pictures in my computer of the trees changing colors - easy to do in Sacramento - the City of Trees.  In Honduras, Fall was a non-existent season.  And here, in Africa, it's no different.  The palm trees,  mangos, avocado trees, etc. don't lose their leaves and change colors - so it's hard to get a feeling of Fall.  Strangely enough I was able to find many Fall decorations in Honduras.  I don't know if it was all the "gringo" influence, or what - but there were always plenty of choices at one of the big department stores in town.

When I was in the States in August,  I took the opportunity to bring some Fall with me.  I purchased some things that I would be able to make some decorations when I returned to Africa - fabric, Fall fake leaves, Fall paper, etc.

This is one of the ways I make my home feel like a home.  I've said it before, but when Madison was here sh
e said to me - mom...your house is ugly...you need to decorate it...

HIV/AIDS and the Responsibility of the Church

That's the name of the class I will be teaching to the Seminary Students in Malabo.

I was asked if I would be interested in teaching a class like this - it hasn't been taught before, so that would require me to come up with the curriculum and structure of the class.  I'm in the last few quarters of my Masters Degree in Public Health, and part of the requirement for completion is to have a certain amount of hours doing some  form of Public Health.  As HIV/AIDS is the number one cause of death here, it seemed like this subject was perfect for fulfilling not only my Masters requirement, but my personal desire in health education and empowering people in their own health - a win-win if I've ever seen one.

Over the last month I have been pouring over reading materials, books, and other curriculum to come up with a curriculum that is going to work in my particular setting.  To this end I've started compiling my resources, some in English and some in Spanish.  I think between all I've read and collected I'll be able to make this happen.  In addition, I'll be starting regularly scheduled clinics with some of the pastors that are currently attending the seminary. Between the classes and the clinics I should easily be able to fulfill my hour requirement for my Masters, and my personal desire with ministry.

I do feel privileged to have my own personal ministry on the field, I know that is not the case with many women missionaries.  We each have our own role, and many are in very different seasons of life where their primary ministry is to their family.  I have always been able to have both ministry to my family and personal ministry, which I realize makes it a little different than others on the field.  This has always been a challenging position, and I have had this conversation with almost every woman who joined our team - what is your role? When women joined our team, there always seemed to be a one-on-one conversation as we discussed what the expectations were of the team and of each individual.  Without exception, we always understood and made it known that the primary responsibility of both the men and the women on the team was to their families.  Because of my season of life - where my daughter was in school, I was able to have a full-time ministry life, working at my clinic full-time, and it was a joy to be able to have my own ministry apart from my husbands.  It was a joy to see God grow the ministry of the clinic, where ultimately a brick-and-mortar clinic was built, and I hired a Honduran physician and nurse, and where, to this day, it continues on.

So now I will see where God will take me on this new journey.  As a teacher at a seminary, and as a medical provider at mobile clinics, I feel a huge weight of responsibility, but I know that God has prepared me and equipped me to be able to do this - and so I strive onward knowing that God will see me through.

Posted by Unknown at 5:06 AM No comments:

Trip to the US

I'm not going to lie - the trip to the States came at a very good place in my life.  Life in Africa is a bit challenging - from daily living, collecting water, camp showers, washing my clothes, grocery shopping, it was a good opportunity to take some time and enjoy the conveniences that life in America brings with it.  Fast internet, consistent electricity, washing machines and a nice hot, long shower brought a moment of stress-free living.  And, thanks to the generous folks who took care of me, I was gifted a dinner at the Cheesecake Factory, the Olive Garden, two trips to the movies, shopping spree at Lowe's, and time to unpack all the gifts that people purchased off of my Wish List.  So - THANK YOU!  Thank you from the bottom of my heart!  I felt well loved for by folks I came in contact with, well loved by those whose homes I stayed in, and well loved by those who reigned gifts upon me.

In addition, I had my esophagus dilated, which I've needed to have done pretty much my entire life, but it seemed a bit daunting to me, but I figured with limited access to emergency medical care, I needed to have this done prior to my return.  I had another medical appointment, dropped my daughter off at college and got her settled in, visited Faith Presbyterian Church and had the privilege of sharing our ministry in Africa.  It was a great trip, a time of refreshment, and prepared me to return to Africa.

So - MANY thanks, once again, to ALL those who cared for me, gifted me, and loved on me.  It was definitely a challenge taking back all my goodies - 5 bags, plus my carry-on - but well worth the unpacking and locating of my new purchases in the house.
Posted by Unknown at 8:58 AM No comments: