Our Street Child program daily addresses the needs of the most forgotten and marginalized people in La Ceiba, Honduras. These kids live and work on the streets and are treated as vermin, not humans. Our Street Child drop-in center provides the gospel, hope, structure, the Bible, food and love to the kids who spend their lives on the streets.

Watch this 4 minute and 30 second video to see the kids who Christ has called us to love:

Posted by Unknown at 7:22 AM No comments:

July 20-27 of 2013 Houston Lake Presbyterian Church from GA served with us in La Ceiba, Honduras. These 14 short-term missionaries made a great impact in the community of Armenia Bonito.

Watch this 2 minute and 15 second video to see the blessings they provided:

Posted by Unknown at 6:23 AM No comments:

July 20-27 of 2013 Phoenix United Reformed Church from AZ served with us in La Ceiba, Honduras. These 12 short-term missionaries made a great impact in the community of La Fe.

Watch this 2 minute, 15 second video of their effort:

Posted by Unknown at 9:46 AM No comments:

July 13-20, 2013 Covenant Pres. from Paso Robles, CA served with us in La Ceiba, Honduras. These nine short-term missionaries made a great impact in the community of Armenia Bonito.

Watch this 2 minute, 15 second video to see their amazing work:

Posted by Unknown at 5:47 AM No comments:

The harsh realities of poverty

I live, work and breath every day in the midst of poverty.  My clinic serves the poorest of the poor in the middle of an extremely poor community.  I care for children that have not eaten, who don't have shoes to go to school, whose hair is tinged red from being in a state of chronic malnourishment. But even among the poor there are levels of poor.  In the States, there are so many resources.  Honestly, we have rich poor compared to so much of the rest of the world.  Food stamps, unemployment, soup kitchens, and the list goes on.  This is the advantage of living in such a wealthy nation.  Here, the resources are absent.  No feeding programs, food stamps, or social resources of almost any kind other than what the Non-Profit organizations like ours has to give.  Given all that, it still shocks me at times, and humbly reminds me of the country I live in when I see what I saw today.  An adult woman of probably 35 or 40 years old found a fountain next to a restaurant, and the only clothes she owned, she took each item off one by one and scrubbed it down in the fountain before putting it back on.  It left me humbled and saddened.
Never have I been in a place in my life where this is my reality.  I pray I always keep that heart for the poor and never forget what I do have.  Not long after we got here, 5 years ago, Madison being  barely 11 years old, we found a young street boy curled up in his single t-shirt sleeping on the street.  We took him to a used store and bought him a pair of pants and some food.  Madison was so troubled.  She said "mom...we have SO much, and he has nothing...we need to give everything away and help him."  I said "honey...that is exactly what we have done.  And here we are, to help people just like him."
I told her not to feel guilty because we had things and he did not.   I said it isn't shame on us, it is shame on them that have and do not give as we have been mandatd by God to do.
So pray for this woman who has left 100% of her pride to have come to this place in her life where her only clothes she must wash piece by piece in a fountain in the middle of the city.  And while you are at it, pray for all the other people who are seeking God and seeking peace in their lives.
Posted by Unknown at 7:50 PM No comments:

There is NEVER a shortage of ministry opportunities for folks back home.  This is an example...the team from Paso Robles brought down some pillowcase dresses that were made by a sweet woman in their congregation to give to the girls in Armenia Bonito.  New clothes are reserved for Christmas or birthdays.  Rarely does a child receive things we are accustomed to like toys, candy, etc.  Parents have to save up money, and clothes are more important.  So, having this opportunity to give out dresses "just because" to many of the young girls in Armenia is a HUGE blessing!  And the girls couldn't have been more excited as they were modeling their new dresses for the camer.

Posted by Unknown at 9:59 PM No comments:

In July of 2013 Westminster Pres. from SC served with us in La Ceiba, Honduras. These 11 short-term missionaries made a great impact in the community of Armenia Bonito.

Watch this 2 minute video to see their work:

Helping each other out

I have been truly blessed in my ministry.  Don't get me wrong, it hasn't been without a lot of work.  Each year I have submitted grant applications for children's vitamins and for parasite medications.  Many times I was denied, but I never gave up.  I kept asking, submitting applications, and made my voice heard.  Because of this, for the past three years I have received huge grants, based on my applications, for both the parasite medications and for children's vitamins.  The amount of poverty, and therefore severe malnourishment can be a bit overwhelming.  Couple that with a child having a parasitic infestation is a recipe for life long disaster. 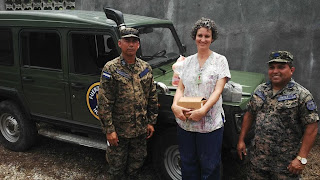 A week ago, Dr. Roger  let me know that he was going to be involved in a medical brigade made up of the Honduran airforce, and Honduran doctors.  He asked me if there was any way that we as an organization could participate.  I explained because of our working with summer teams coming, for me to make myself available to a community that lies almost two hours away from La Ceiba, on the day the teams comes was just not a possibility.  However, I did tell him I could give him some extra supplies, and some vitamins and parasite medications.  At almost $1.00 a dose for parasite meds, and almost $4.00 for a single month supply of vitamins, costs can rise fast.  The government here just doesn't have money.  But with our help, from my little clinic, we were able to supply almost 4,000 parasite medications, and over 8,000 children's vitamins.
Because of the donation of medications and supplies, the Honduran Air Force made a special visit out to our clinic last week to thank us for the donations, and to give us a certificate of appreciation.  I am constantly surprised how God is using our little clinic to glorify Himself.